Here at Twilight we hear some dreadful stories of animal cruelty; things you would not believe that one species could do to another. But, sadly, that is life and all we can do, as caring people, is try to pick up the pieces and make a difference. So, now it is time to introduce you to young Bob.

Due to his former life story he has undergone a name change, a country change and is now learning a new way of love and life. His story is sad and sickening. You only need to know that when he was two he was taken by a sad and sick man who used him for his own sexual needs. We have decided to tell you the truth, because this kind of abuse happens out there and, as we pick up the pieces, we believe we should take stock of how Bob wants to deal with it, and follow his example.

He has travelled many miles across Europe, paid for by two special people, Tod and Ros. An organisation found him and have gone an incredible way in the last three years to rehab him. Then, on arrival in France, the lucky chance of support through the mighty Orfee for collection and shared travel. And, finally, our dear Paul and Jeanette, did a nine hour turn around for his last leg. Four days he was on the road.

He is one very special young man. His injuries are as sad as you would expect, hence becoming a Twilighter. Both rear legs have been broken, the right leg is permanently displaced from the hip and gives pain. His bowel and anal track are damaged. He is incontinent from his bowel. But, and here’s the thing, he is so happy. Sure, we have all that ‘male’ stuff to get through of moving into a new pack and boy does he have teeth! But that is already passing. Now at the age of five, he has ahead a life of love and putting the former actions of mankind out of his mind. Welcome young Bobby boy — let life begin. 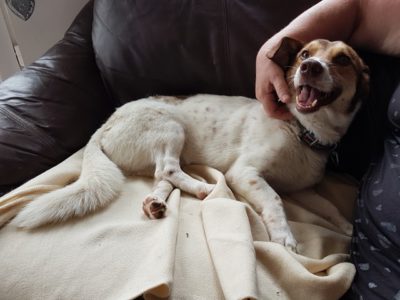 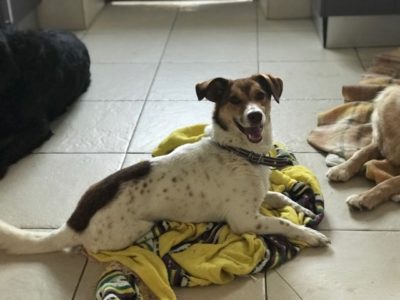 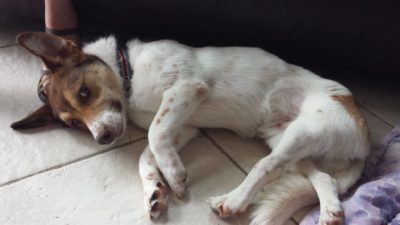