All the dogs live in the house with Mike and Leeanne as family pets. They have free run of the house and garden, with the back door open all day.

Do dogs pay to come to Twilight?

Rarely does a dog arrive with any funding, they are from refuges, poor homes or abandoned. Every year, Twilight and its band of volunteers have to raise around €35,000 for cover the cost of feeding and caring for the dogs.

Do the vets charge to treat the dogs?

The vets are fantastic with their care and support. They charge the same reduced fee as they do to an SPA for treatment or medication. Average monthly fees are currently around €1000.

Is Twilight is government funded?

As a non-profit organisation, Twilight is reliant entirely on donations from private individuals or other associations or fund-raising activities. Twilight is fully registered as a French association: W242001328

Does Twilight have paid staff or are Leeanne and Mike paid wages?

Twilight has no paid staff. Mike and Leeanne are 24/7 live-in volunteers! Twilight has four hours paid cleaning help per week, when there are sufficient funds, to help with the bigger clean, and four hours DIY help per week, now that they are less able. Any additional help is privately funded by L & M. Note, at this point, Twilight has incredible volunteer help at various times without which the amount of work could not now be sustained.

Does Twilight put dogs down?

Twilight is the last hope hotel. We care for dogs in their last days, months and years. The last kindness we can give some of them is to have the vet assist their rainbow bridge passing. It is a joint decision with the vet. A dog will have all it needs at Twilight, including not suffering at the end. No pleasure is taken for giving the death statistics, but it is a fact that Twilight has a greater number than the average refuge due to its aged population!

What will happen when Leeanne & Mike stop running Twilight?

Leeanne says, “Well, we have been going over ten years now. It is the hardest, most shattering, and most rewarding work we have ever done. It will likely kill us, fatigue and stress. There is rarely much credit in the bank. But, like any other French Association (Charity), any funds left in the account when an association folds, for whatever reason, are handed over to a likeminded association. Annual accounts are made and audited by an independent accountant.”

Why does Twilight need to ask for help?

Yes, we did choose to do this, for five or six animals in the early days. Then, it was clear that there was a tremendous need in the animal rescue world. We decided to do a bit more if folks were happy to help us. Remember, you don’t have to donate. We had no idea it would reach this number. But really, it’s a drop in the ocean. We receive requests to take four or five old or disabled dogs every day. And that is just little us, from those who know about us. Wouldn’t it be wonderful if we didn’t have to be here! But, the fact is that 24-hour care is loving but tiring. Our home is lovely, but it is no longer a place for nick-nacks and personal things, there are too many tails and we need to maintain hygiene. If you didn’t love your partner deeply you would not survive. You can go a full day without talking as you are so busy and the bedroom is where you sleep (too tired for anything else!). You no longer do what you want when you want, you do what you can when you can. Your friends change, as non dog lovers can’t take the madness (and who can blame them!). You become an all-rounder: medical needs, fundraising musts, healer, friend and disciplinarian. You talk to yourself, you sing even louder … and you don’t care anymore! Living with such fragility of life gives you the greatest of highs in hope and wonder. Living with such frequent death gives you insight and belief in every moment. The insight it gives you into mankind is both humbling and saddening.

Why does Twilight do this?

In the words of one of our supporters, remember the Twilight Effect:

That’s the Twilight Effect. That magical Twilight Effect has encouraged both the French and the English community to step up and take on the oldies, and instead of being afraid of death, to celebrate the life that the dogs have. Old dogs do not go to retirement homes to die. They go to live. 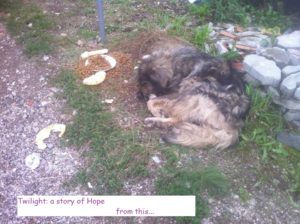 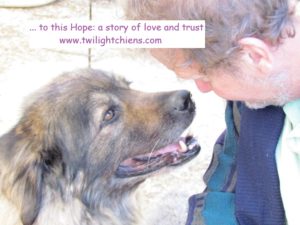 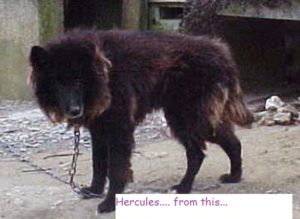 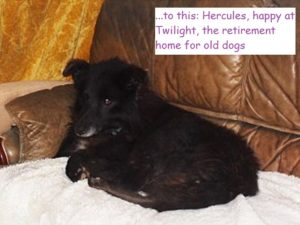